A new wave of attacks that several regions of Kurdistan are suffering at the hands of the Turkish and Iranian armed forces has left dozens killed in just one week. In northern Syria, towns along the Turkish-Syrian border are being bombed by the Turkish air force in a new punitive operation against the autonomous system led by the left-wing Kurdish movement. Meanwhile, the security forces of Iran's theocratic regime are suppressing anti-government protests in Kurdish-majority regions.

In the Autonomous Administration of North and East Syria (AANES) 37 people have been killed since Saturday 19, according to the Syrian Observatory for Human Rights, after the Turkish Air Force launched Operation Claw-Sword. The fatalities include 18 soldiers of the Syrian army, 13 fighters belonging or linked to the Syrian Democratic Forces (AANES defense force), 5 other Kurdish fighters, and ANHA agency journaist İsam Ebdullah. Kurdish sources on the ground point out that the number of victims is higher and that, at the very least, a dozen civilians have been killed.

Last night & this morning, Turkey conducted a series of aerial attacks across NES. So far, 11 civilians have reportedly been killed (1 journalist) and 6 injured (2 journalists). The attacks occurred across US- and Russian-controlled airspace; both likely gave the green light. pic.twitter.com/nhphvPZ8XG

Besides, targets in South Kurdistan (Iraq) have also been attacked.

According to the Turkish government, bases of the Kurdistan Workers’ Party (PKK) in Qandil, Asos and Hakurk (South Kurdistan), and bases of the People's Protection Units (YPG) in Rojava have been targeted. But the SDF claims that the Turkish Air Force has targeted civilian facilities, such as a covid hospital in Kobanê and power stations in Derik.
Ankara claims the operation comes as a response to the attack on Istanbul’s İstiklal Avenue on November 13, in which 6 people were killed and 81 were injured. The Turkish government says that the attack was ordered by the PKK. Kurdish politico-military organizations deny this and claim that the attack was organized by elements within the Turkish state itself.

The SDF has blamed Russia and the United States for Turkey’s continued punitive operations against the AANES. The AANES defense force believes that the Turkish Air Force would not have launched a new wave of attacks against its territory if Moscow and Washington had not given tacit approval.
Turkish President Recep Tayyip Erdogan has vowed on several occasions to completely destroy the AANES self-government. Apart from several waves of airstrikes, the Turkish army invaded the northern part of Syria on three occasions: in 2016-2017, it occupied the area of Jarabulus and Al-Bab; in 2018, it did the same in Efrîn; and finally in 2019, it conquered the Serê Kaniyê-Girê Spî (Tel Abyad) sector. As a result, Turkey currently occupies nearly 9,000 square kilometres of territory along the Turkish-Syrian border.
Suppression of protests in East Kurdistan
As Turkey targets Rojava, the forces of the Islamic Republic of Iran are cracking down on anti-government protesters in the Eastern Kurdistan regions. According to Norwegian-based Kurdish human rights organization Hengaw, Iranian security forces have killed around 30 people in several Kurdish cities in the past week, to be added to another 80 in previous weeks. The organization also reports the abduction of students from the Razi University of Kirmaşan (Kermanshah) and the arrest of 4,000 people.

The BBC and Newsweek report on the violent repression that the Revolutionary Guards —a branch of the Iranian army— are inflicting on Kurdish-majority cities of Ciwanro (Javanpour) and Mehabad (Mahabad).
The CNN has meanwhile broadcast a longer piece in which, based on “a number of sources” including the testimony of a Kurdish woman who has fled Iran, it draws a “pattern of repression” consisting of multiple police stations throughout East Kurdistan. Here's the CNN screenshot drawing such a pattern: 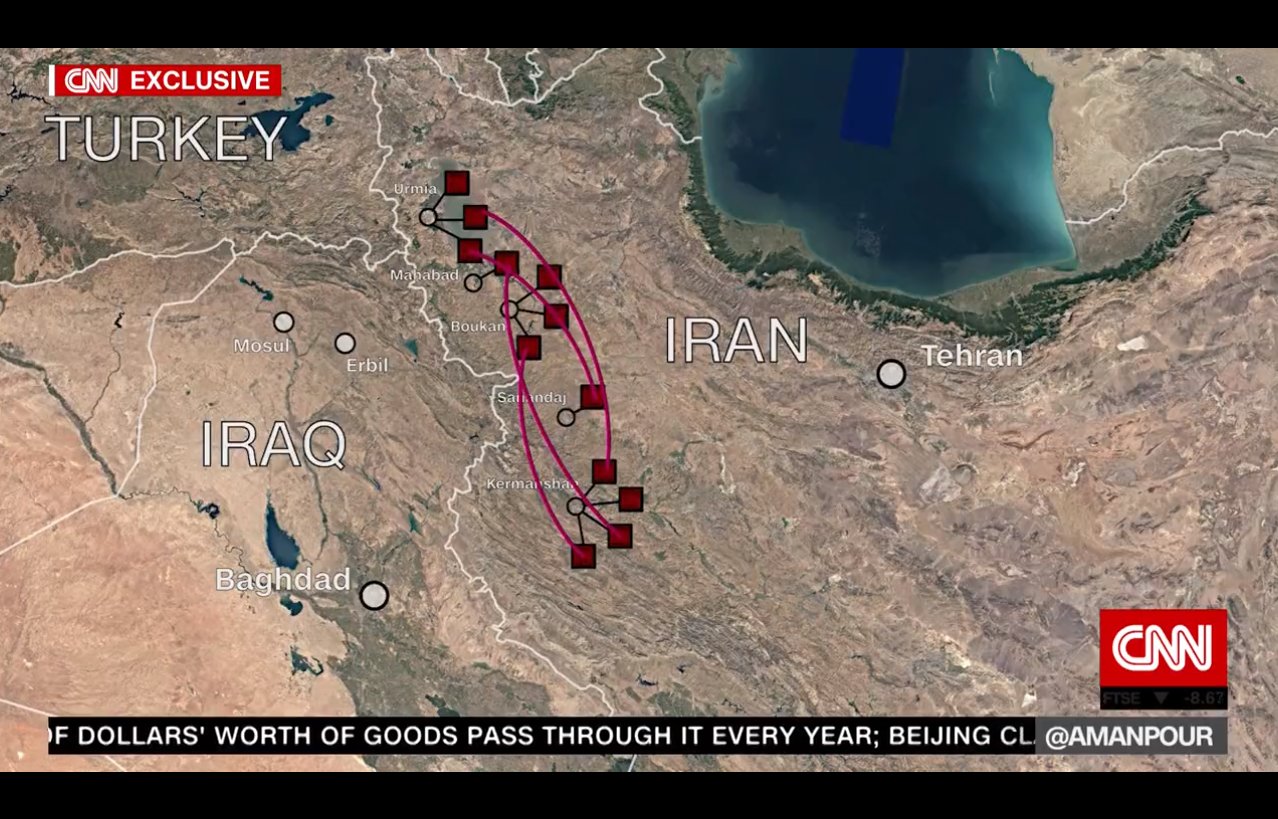 This is the full report, in which rapes by security personnel, both against women and men, are denounced:

Exclusive: While demonstrations continue across Iran, as many as 14,000 people have been arrested since protests began.

Now, men and women are alleging sexual assault by Iran’s security forces, as @nimaelbagir reports, in a story that contains disturbing details. pic.twitter.com/H9BaRvqVym

Protests against the regime have spread to cities and towns across Iran following the death of young Kurdish woman Mahsa Amini on September 16. Amini was arrested for not wearing the hijab. Iranian police said that after the arrest, the young woman suffered a heart attack. But several witnesses claim she died as a result of being severely beaten by police officers.
Amini’s death triggered a historic wave of popular protests to which the theocratic regime has responded with brutality. NGO Iran Human Rights counted —and it is a “minimum” estimate— 378 killed due to the repression of the security forces until November 19. The highest death tolls correspond to provinces inhabited by various stateless peoples of Iran: Sistan and Baluchistan, Kurdistan, West Azerbaijan (where a large part of the population is also Kurdish), Tehran, Mazandaran, and Gilan (the territories of the Mazandarani and Gilaki peoples, respectively).

Protests banned in Turkey
Faced with this situation of attacks against its people, the Kurdish movement in Turkey has called some demonstrations that have been banned by the authorities. Bianet reports that several people have been arrested in protests in Amed (Diyarbakır) and other Kurdish cities. Demonstrations have been banned in Amed, Wan (Van), Çewlîg (Bingöl), and Şirnex (Şırnak).